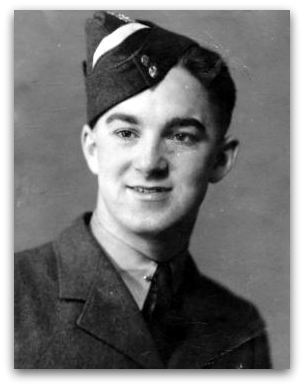 Roy Edward Carter, born March 2, 1921 at Burketon, Ontario, completed his senior matriculation at Blackstock, Ontario in 1940, later moving to Toronto, Ontario in 1941 to attend Normal School. Single, Carter worked as a schoolteacher at Myrtle in Whitby Township, Ontario before enlisting at Toronto May 30, 1942. Carter served with the Royal Canadian Air Force attached to the No. 431 (Iroquois) Squadron (The Hatiten Ronteriios) as a Flying Officer during the Second World War. Part of Bomber Command, the No. 431 Squadron operated Handley Page Halifax aircraft, targeting industrial sites over Germany. On June 17, 1944, Flying Officer Roy Edward Carter died after being shot down by a German night fighter during bombing operations over the synthetic oil refinery at Sterkrade, near Essen, Germany. Landing in the village of Boekel and sheltered by the Dutch resistance, Carter made his way through Holland until captured by Gestapo and executed on July 9, 1944 at Tillburg in The Netherlands. Carter is commemorated on the Runnymede Memorial, Surrey, England, on a stone memorial at Tillburg, on the Bomber Command Memorial Wall, Nanton, Alberta, and in the Book of Remembrance for Silver Mothers, Oshawa, Ontario. Son or John (First World War veteran) and Agnes Beatrice (nee Coates) Carter of Burketon, Ontario; brother of Fred, Robert, George, Ethel, and Isabel Carter; he was 23 years old. Roy E. Carter Memorial Park at Blackstock, Ontario is named in his honour. Citation(s): 1939-1945 Star, France-Germany Star, Defence Medal, General Service Medal, Canadian Volunteer Service Medal with Clasp. 'When you go home, tell them of us and say, for your tomorrow, we gave our today.'