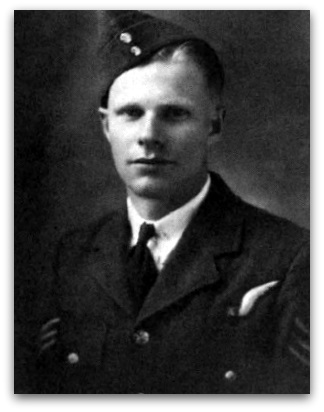 John Ruskin Askew, born May 22, 1919 at Cartwright, Manitoba, attended school at East Mountain in the district before completing his education at Cartwright High School in 1939. Single, Askew worked on the family farm at Cartwright before enlisting at Winnipeg, Manitoba October 10, 1941. Askew served with the Royal Canadian Air Force (Per Ardua Ad Astra) attached to No. 1659 Heavy Conversion Unit as a Flight Sergeant (Air Gunner) during the Second World War. Based at RAF Leeming, Yorkshire, England, the No. 1659 HCU trained aircrew to operate Handley Page Halifax bombers. Seriously injured on January 24, 1943 after his Halifax aircraft crashed into Great Shunner Fell, west of Thwaite, Yorkshire, England, Flight Sergeant (Air Gunner) John Ruskin Askew was taken to Catterick Military Hospital, Yorkshire where he died of his injuries on January 29, 1943. The No. 1659 had been on a cross-country training exercise when encountering dense fog at the time of the accident. Askew is commemorated at the Ripon Cemetery, Yorkshire, England, on the Cartwright War Memorial, Manitoba, and on the Bomber Command Memorial Wall, Nanton, Alberta. Son of William Ruskin and Josephine ‘Josie’ (nee Robinson) Askew of Cartwright, Manitoba; brother of George William Askew (RCAF, died 26 July 1943); he was 23 years old. Askew Island on Webber Lake, Manitoba is named in his honour. The Askew Memorial Scholarship honours both Askew sons and is designated for Cartwright students who achieve the highest mark in Canadian history. Citation(s): Defence Medal, War Medal, Canadian Volunteer Service Medal with Clasp "At the going down of the sun and in the morning, we will remember them"