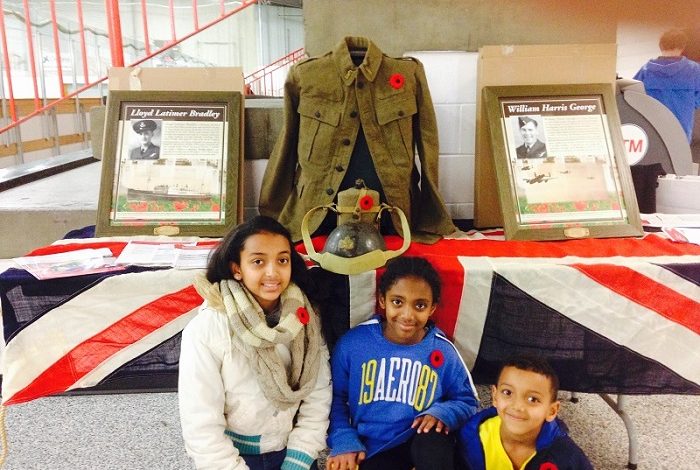 While John Pritchard School was preparing to celebrate its 100th anniversary in October, some Grade 7 students from the school were also stepping back a century to research local soldiers from the First World War.

They were working on a project that was the brainchild of John Pritchard teacher Daniel Smith and Linda Kohut, a retired JP teacher who is now a school liaison for the Royal Canadian Legion on Henderson Highway.

Ms. Kohut visited the class to tell them stories about the First World War and how fallen soldiers are commemorated in Europe, “to light a fire in them,” she says. Then the students did online research on 48 First World War soldiers from the River East area who had been killed on the battlefield or died as a result of combat wounds and illnesses.

They spent hours on the Library and Archives Canada website, looking for the scanned enlistment documents for these soldiers. From there, they collected information on each of the soldiers, including their name, address, occupation, rank, battalion and next of kin. Then they visited the Commonwealth War Graves Commission website to look up where these soldiers were buried, or in the case of those missing in action, commemorated.

They created write-ups on each of the soldiers and provided them to the Canadian Fallen Heroes Foundation, which maintains a virtual memorial at www.canadianfallenheroes.com. The students will be listed on the site in recognition for their efforts.

Mr. Smith says he was pleasantly surprised at the connection his Grade 7 class felt to the project and the soldiers they studied. He credits it with giving them a more tangible connection to the war.

“You can talk about a war and 60,000 people missing, but it’s different when you talk about a certain guy who lived in that house that’s still there just down the street,” says Mr. Smith. “It’s not about some faraway place. It’s in Winnipeg, in our neighbourhood, and it’s real.”

The students would like to have photos of the soldiers to go with the profiles they’ve created. They’ve posted a list of the soldiers on their school website so the community can check it out. If anyone has a photo of a soldier on the list, they can contact the school.  Visit: retsd.mb.ca/school/jp