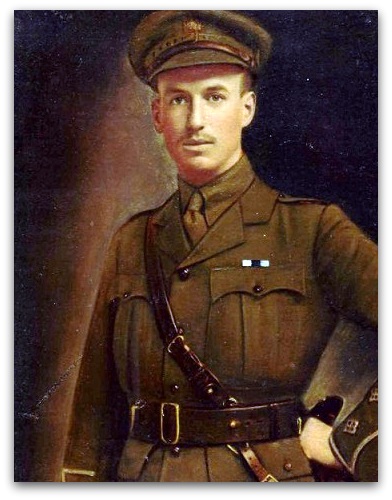 Arthur Ross Ackerman was born September 14, 1893 at Peterborough, Ontario, and completed his education at Peterborough Collegiate & Vocational School before joining the 57th Regiment, Peterborough Rangers as a Sergeant. Single and working as a harness manufacturer for the family-owned B. F. Ackerman & Sons Company in Peterborough, he enlisted at Valcartier, Quebec September 22, 1914. Overseas with the First Canadian Contingent in October 1914, Ackerman served as a Lieutenant with the Canadian Expeditionary Force attached to the 2nd Battalion (Eastern Ontario) during the First World War. Landing in France in March 1915, the 2nd Battalion fought along the Western Front in France and Belgium. Shell shocked in February 1916, he transferred to the First Trench Mortar Company during the Battle of the Somme. Wounded by gunshot to his stomach after his gun misfired on September 23, 1916, Ackerman returned to England for convalescence at No. 1 General Hospital in London, England. On October 11, 1916, Lieutenant Arthur Ross Ackerman died of his wounds at No. 1 General Hospital and his remains returned to Peterborough. He is buried at Little Lake Cemetery, Peterborough and commemorated on the Veterans Wall of Honour, Peterborough. Son of Benjamin Franklin and Frances Charlotte (nee Lumsden) Ackerman of Peterborough; brother of William C., Estelle L., Jennie E. and Major Charles H. Ackerman; he was 23 years old. Ackerman Crescent in Peterborough is named to honour the Ackerman family. Citation(s): 1914-1915 Star. "When you go home, tell them of us and say, 'For your tomorrow, we gave our today. '"