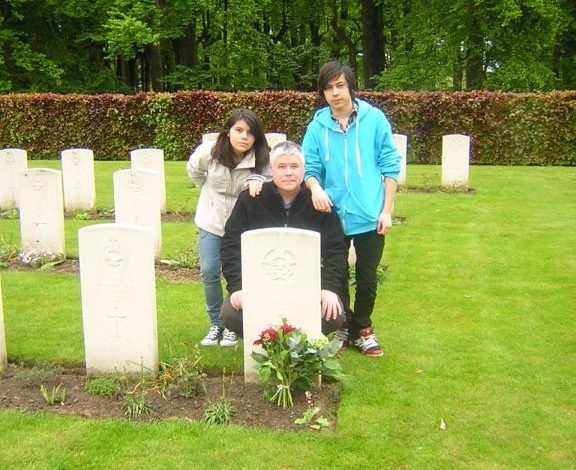 Our research partners were recently delivered this letter from Mr. Fred Duglas of Saskatoon, SK. We are proud to help families reconnect to their heritage and ancestors through memorials. If you have lost a loved one during war-time, please reach out to us at memorials@canadianfallenheroes.com.

“Hi –
I feel that I would be remiss if I did not express my sincere gratitude and thank you for my recent dealings with your organization. I am most appreciative and impressed with the help I received from Toni Hall and Ingeborg Leavell in designing and creating a commemorative plaque for my cousin John(Jack)Gilson to be placed in the Saskatoon Aviation Museum Wall of Heroes.

Your foundation is to be highly commended for its efforts to commemorate these persons who gave their all.

I am sending along three photos relevant to John(Jack)Gilson’s story. The first is a picture of the two young men in uniform standing in front of the Sir Walter Scott memorial in Edinburgh. Pilot Gilson is on the right and Dale Loewen a hometown buddy and John’s Bomb Aimer is on the left. They were on leave from Croft Air Base in NorthYorkshire a few weeks before their fateful crash.

The second photo was taken in May 2012 shows my son Tom Buglas and his two children Arthur and Lauren at the grave of John(Jack)Gilson. They were visiting and placing flowers on his grave and the grave of his friend, Dale Loewen.

The third photo was taken in October 2021. It shows me, Fred Buglas (86) in front of the 1942 TigerMoth biplane trainer at the Saskatoon Aviation Museum. I was treated to a wonderful half-hour flight in the TigerMoth over the city and area. This plane would be similar to that used by Gilson in the British Commonwealth Air Training Program. 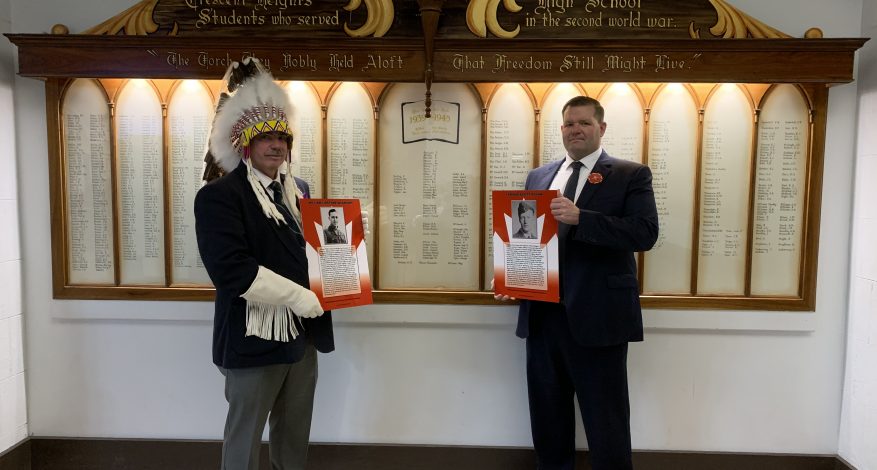 Local students and volunteer archivist, Iris S. dug through the archives at Crescent Heights High School in Calgary, Alberta in hopes of bringing back the memory of the fallen heroes and Alumni of Crescent Heights. Pictured is Mike Wilson, Principal and Warrant Officer Glenn Miller standing proudly before the new memorial wall.

Iris is quoted as saying:

Outside the Main Office of Crescent Heights High School is a World War II Memorial which honours Crescent Students who fought inb the war. It is titled

“The Torch They Nobly Held Aloft That Freedom Still Might Give”

The middle panel of the Memorial has the name of 88 servicemen who gave their lives, including well known figures such as William Lidstone McKnight.

The Memorial was created by the Girl’s Association War Service Records Committee. This group was very active firing the war, keeping records of where the servicemen were deployed, sending them Christmas newsletters and Crescent Bugle yearbooks, and answering servicemen letters. In 1946 the committee organized a Welcome Home Night and then with the help of the student body and the Calgary Board of Education funded the WWII Memorial which you see in the picture.

The staff and volunteers of the Canadian Fallen Heroes Foundation who like to express their eternal gratitude to the team at Crescent Heights High School for showing Remembrance in Action and allowing Canada’s younger generation learn the value of remembrance.

For more information on the project and how you can help, please visit the Support section of our website. 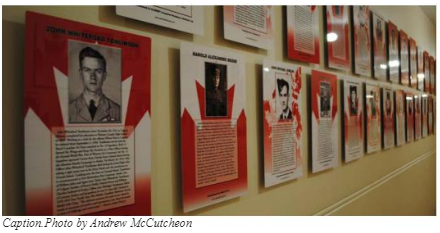 Friends of the Foundation, Calgary’s Kerby Centre for 55+ living has featured their Wall of Remembrance in this months edition of the Kerby News. Located in the centre’s “Hall of Valour”, you can walk about the top floor to view the prints and pay your respects to some of Calgary’s 3000 Fallen Heroes. For more information, please read the full length article on page 10.

We wish to send our deepest gratitude to the community organizations, such as the Kerby Centre, for their on-going support of this project. It is only with community spirit like this, we can continue our work in honouring all 118,000 men and women for their sacrifice.

Please visit our online memorials at http://www.canadianfallenheroes.com/in_memoriam.html to view the fallen of your local community.