HomeBlogNewsRemembrance in Action: Print dedication to the daughter of Warrant Officer 1 Frederick Larsen 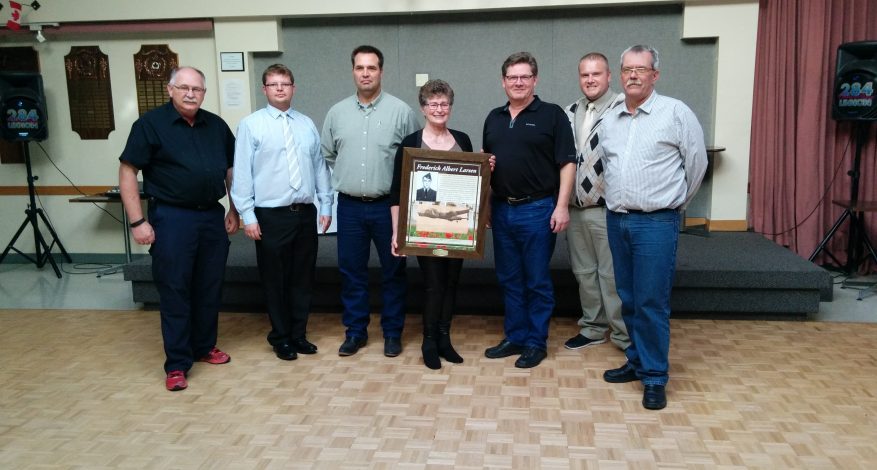 Remembrance in Action: Print dedication to the daughter of Warrant Officer 1 Frederick Larsen

On October 15, 2015, The Canadian Fallen Heroes Foundation along with the Teamsters Union Local No. 362 of Calgary, Alberta proudly presented and donated the memorial print of Warrant Officer 1 Frederick Larsen to his daughter, Wendy Coté. Wendy is the daughter of Larsen and never had the chance to meet him as she was born after Larsen went overseas to fight for Canada in World War II. The dedication ceremony took place at the Royal Canadian Legion Branch No. 284 on 38 Avenue NE, Calgary at 14:00. This branch of the Royal Canadian Legion proudly displays 12 memorial prints in their auditorium on behalf of the foundation for all to see year round.

A few months ago the Aunt of Wendy and Sister-in-Law of Larsen, Mrs. June Reid, was at the 284 Branch and happened to come across a print on display. This print turned out to be her Brother-in-Law that was killed in action on January 6, 1944 when his Lancaster aircraft went missing during night operations against Stettin, Germany. With excitement, June contacted Wendy to let her know of the print. Wendy came to the legion to see the print of her father and was left astonished as she did not know much of his history. Upon hearing this amazing story, the Canadian Fallen Heroes Foundation decided to donate the print back to Wendy Coté as a thank you to her and her family for Frederick Larsen’s service and loyalty to Canada.

All of us at the foundation would like to thank the Teamsters Union Local No. 362 for donating the funds to have this print created. Without their commitment to community service, we may have never had the chance to reunite Wendy with her father. Mr. Stacey Tulp and Mr. David Frost of the Teamsters Union were in attendance to dedicate and personally present the print to Wendy. To learn more about the teamsters and their positive impact on the community, please visit their website at www.teamsters362.com.

We would also like to thank Global News Calgary and CTV News Calgary for coming out and broadcasting a spotlight of the event. To view the broadcasts, please visit the below links.